Beginning in February of 2021, I began sampling gumbo at restaurants around town. Some were not great. Some were good enough. And some would warrant a return visit.

First off, the ones that I did not like.

Acme Oyster and Seafood. The first time I sampled it, there wasn't any seafood to speak of in it. Just a mediocre, lukewarm gumbo broth. The second time, pretty much the same experience. Not recommended.

Eugene's Gulf Coast Cuisine. The day I went the chicken in the gumbo had that warmed over flavor profile that comes from refrigerating chicken and bringing it out of the fridge the next or subsequent days.

Eunice Restaurant. The chicken was so heavily smoky that this became a one note gumbo. Smoky chicken.

State Fare Kitchen on I-10. I sat at the bar and ordered the gumbo. The bartender said "let me bring you a sample first to taste as some people think it is too dark." Well, I LOVE a good gumbo where the roux has blackened sufficiently. It shows the chef has the necessary skills. In this case, it wasn't a dark roux. It was a burned roux. And I was so grateful that I got to do a taste test first. Big tip to the bartender that day.

Fegen's on Studewood. Actually the jury is still out on this one. On the day I went, the roux was just moving toward a burned flour taste. But I think they use the bake in oven method in order to make larger batches and it could have just been an off day. I need to go again and report back.

Flying Fish on Durham. I really wanted to like the gumbo here because they are local to the Heights. When you make a roux, that hot oil breaks down the glutenin and gliadin, the two proteins that form the gluten web when liquid is added. So the flour loses its thickening ability as it develops for the nutty roux flavor we all love. Although the roux here was dark, the gumbo had this thick flour paste feel and taste to it that was very unpleasant. There was a nice amount of sausage and shrimp but I couldn't get past that flour paste consistency. Same problem that I had with Goode Company Seafood.

Alfreda's. I remember not liking this one bit. Can't remember if it was because it was really greasy (but not in a good way like at Viola and Agnes) or that the spicing was just unbalanced. I seem to remember thinking "clueless kitchen".

Joe's Deli on Winkler on the East Side. More like a gumbo porridge. Cheap sausage, with a texture more like Vienna sausages. Broken up bits of rice cooked down in the gumbo.

And now, on to some gumbos that I liked.

Neyow's. It was a little bit creepy at lunchtime. The place was empty except for me, so I guess their business is a night-time affair. It was a good gumbo. Very Louisiana (they have a location in New Orleans too) and I'm sure the recipe came from a Louisiana source. I haven't been back, but I want to re-visit in 2022.

Bayou City Seafood on Richmond. I liked this gumbo a lot and it was one of the true bargains for the price. Big shrimp. Real seafood. I've been back three times now.

Viola and Agnes on NASA Road 1. Still my favorite. The chef is from Lake Charles. The gumbo is really rich, with a layer of spicy oil on top, and includes a crab claw and a chicken drumstick. This is a place I would take out of towners as I pretty much like everything on the menu.  (http://www.houstonfoodexplorers.com/2021/07/gumbo-viola-agnes-nasa-road-1-in-clear.html )

Zydeco Restaurant in downtown Houston. I ordered both a seafood gumbo and a chicken and sausage gumbo. The steam table looked really sad, but the gumbo. These were the simple but well prepared gumbos that I could eat every day. Actually, I had planned to just have a taste of each bowl and take the rest home. But spoonful followed spoonful and I burned through both bowls. And the jalapeño cornbread was tasty, too. Now, they had jars of Kary's Dark Roux for sale. I'm not sure if they make their own or just use the jar roux.

Le Pam's House of Creole out on 1960. Very Louisiana. Very home cookin'. I liked the way the gumbo came together as it was ordered. Some roux and broth. Add some seafood. Heat it up. Tasty gumbo for sure. One thing that I suspect, though I'm not 100% sure...unlike every other gumbo I've tried, the Le Pam gumbo seemed to have a hint of Zatarain or Louisiana Foods crab boil liquid in it.

7 Spice Cajun Seafood (right across the street from Le Pam's, and, I see that there is now one on Westheimer also). Funny that I did two places in one day. I suspect the gumbo at 7 Spice is more "chain restaurant", might have been where they just opened a jar of roux, etc. But you know, something about it, I kinda liked it just as much as Le Pam's. Go figure.

Grace's on Kirby had a decent gumbo that I would order again.

Supreme Gumbo. A little food truck on Southmore at Almeda. A tasty gumbo with a real Lousiana feel to it. I look forward to having it again.

Lucille's. They feature a gumbo z'herbes, which I always thought was a meatless gumbo for Lent made with 9 kinds of greens. But theirs had meats in it and I've since learned that this is not out of the ordinary in the world of Louisiana gumbo. Online, I've seen a bunch of recipes for this type of gumbo that include ham hock or other types of meat. (the Leah Chase recipe has chorizo, sausage, brisket, etc. for example : https://www.southernliving.com/recipes/leah-chase-gumbo-z-herbes) It was a tasty gumbo.

Little Daddy's Gumbo Bar. In Galveston and also in League City. I've always liked their gumbo and enjoy getting a bowl when I am out that way.

Saigon House. The Vietnamese restaurant of chef Tony Nguyen, located out on 1960 (aka Cypress Creek Parkway). And a mile or so from Le Pam's and 7 Spice. A gumbo that I really enjoyed. Some comments from others indicate it may be a tad inconsistent so, fingers crossed, it will be delicious on the day that you visit. Here's a photo of their gumbo presentation. 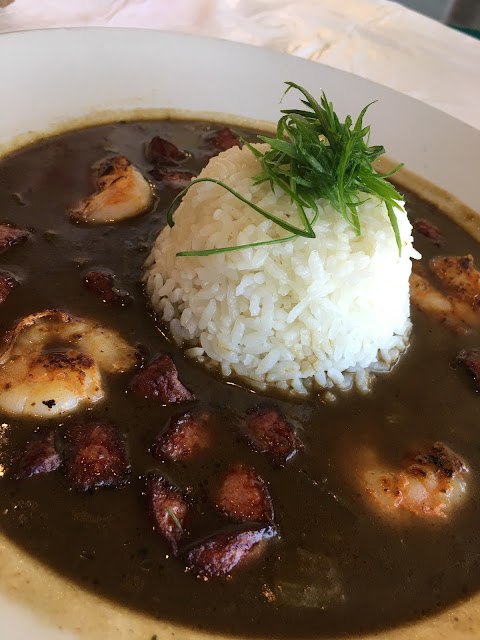 Abe's Cajun Market in Clear Lake.  A salty gumbo which would normally be an instant deal breaker. But I really like this gumbo. Even with its saltiness, it has a nice amount of sausage and chicken and a pretty good flavor profile.

Brennan's. Again, a gumbo with no soul. Kind of bland. Kind of boring. I wouldn't order it again. But not bad, so I put it in this "good enough" column.

A friend said good things about the Jason's Deli gumbo (prepared at one location in their commissary). I tried it at two locations and found it tasty enough.

Crawfish Cafe in the Heights. And I think the original location is on Bellaire Blvd. Again, a perfectly acceptable gumbo. The place is rocking at night, due to the boiled crawfish or seafood that you order sauced to your particular tastes.

Crescent City Beignet on San Felipe. An "okay" gumbo with no soul to it.

Pier 6 in San Leon. Another "okay" gumbo. Smallish serving. Decent flavor. Included okra in the recipe. Included two oysters which was a plus. But they cooked the smallish shrimp in the gumbo instead of cooking them separately and adding to the hot broth just before serving. So the shrimp were tough and not very appealing.