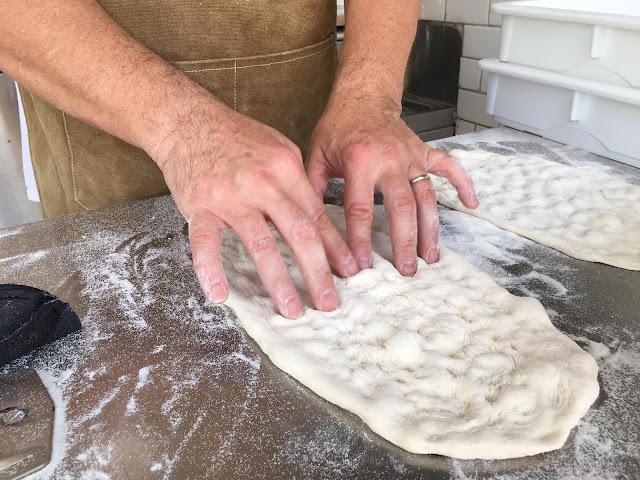 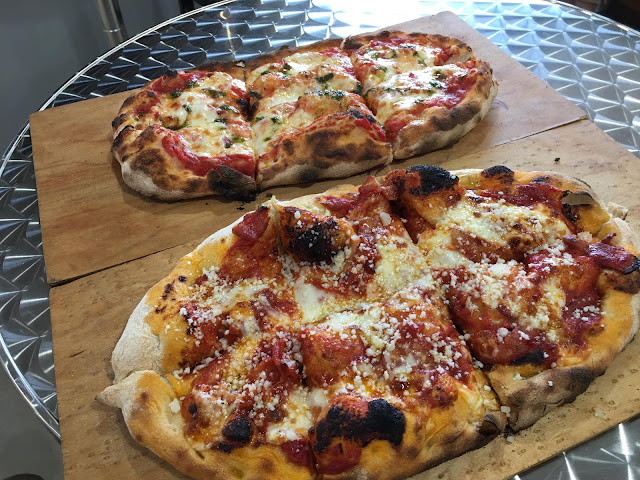 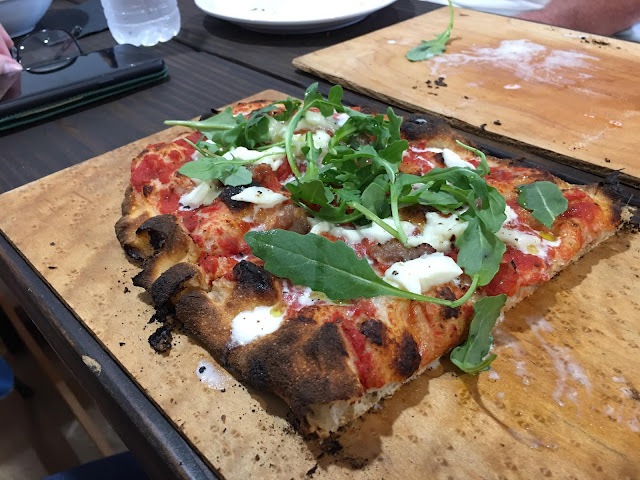 Chef Andrea is from Rome.

For me, the crust is perfect. Chewy and delicious. The quality of ingredients is about as good as it gets. His skill as a pizzaolo, well, for me, I wouldn't want to eat anywhere else on a Sunday, mid-day. Prices are almost too reasonable.

And, he also produces excellent gelati in remarkably interesting flavors.

John Nechman writes: “. Thank you, thank you, thank you to H-Town mortgage guru John Frels, curator of the Houston Heights Foodies page, for sharing the "secret" of ORG Pizza Garden (5618 Yale St., in the northern stretches of Independence Heights). The business model for this hidden-in-plain-sight spot is somewhat baffling:  open only Sundays from 9-2; 3 tables inside and a few more hard benches outside, mostly exposed to the elements; a masonry pizza oven set up in a trailer in the middle of the outdoor patio; barbed wire topping a chain link fence surrounding the rather bleak looking property; business development coming mostly from word-of-mouth from those who've dined here before.

Why? Because the food is spectacular. Frels and Houston foodie extraordinaire Jay P. Francis (who also visited ORG yesterday) have called the pizza the best in the city. It's definitely a contender.  If you've had the 2 most famous styles of Roman pizza: al taglio (square and thicker crust, sold in "cut" squares) and tonda (thinner, crispy crust and usually round), this pizza from Chef Andrea dal Monte is like the best of both--pizza alla pala. It somehow manages to be both fluffy and crispy at the same time and comes out in an oval shape on  a traditional wood paddle. At $10 for the most expensive version (the magnificent matriciana, made with a rich marinara infused with guanciale and pecorino), this is one of the best deals in town and one of the tastiest pizzas.  I couldn't get a close look at the oven, but it appeared to be a Marona forni oven--perfect for cooking this style of pizza.

Also from within this magical oven comes the bread for the farciti, sort of a stuffed toast.  We tried the version with fresh-sliced prosciutto, camembert, a slather of figs compote, organic arugula, and golden local honey, and it soars to the highest rankings of Houston's best  sandwiches. I hope Jeff Balke, who compiles a list of best sandwiches for the Houston Press, gets to try this one).  A stunner of a sandwich.

We somehow managed to scarf down a maritiramisu maritozzo (sweet bun) as well and left with a pint of peach, balsamic venegar, and roasteed honey ice cream to enjoy later.

You can bring your own booze (for $14 a bottle, Total Wine & More sells an orange Sun Goddess Pinot Grigio Ramato from Mary J Blige that is refreshing and pairs with everything!), which means an exceptional Sunday lunch with wine for 2 can easily come in under $40. This place is still under-the-radar enough to likely have seating if you show up early, but before long, unless they expand (and hopefully open on other days, too), it won't be possible to find a seat here.“