This Houston institution slipped by me. I’d never been. I knew that it was historically significant to the max. On previous attempts, it was always too crowded. “Next time”, I would say. But recently, having seen a photo of their puffy taco, I knew that it was a “must”.

Damn, that puffy taco plate was good. The rice and beans that accompanied it were great. As were the tacos. Crunchy. Not those softer, chewier, thick masa ones that SA is known for. A tad thicker than the ones at the (now closed) beloved Fiesta Loma Linda.

And, I saw that caldo de menudo is a daily feature. Not just on weekends.

This is a breakfast and lunch place. It closes at 2:00 pm. 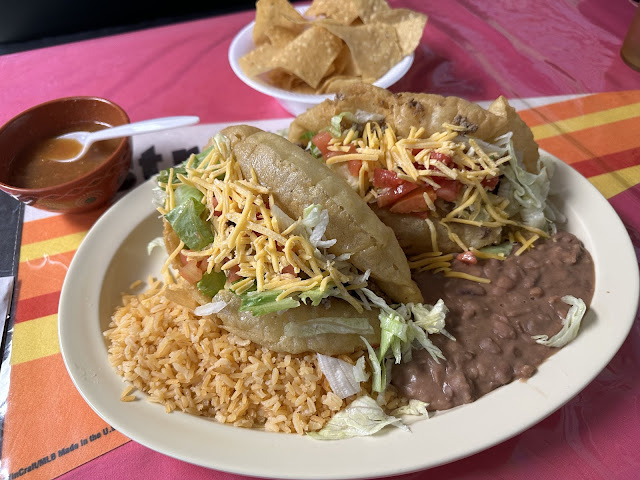 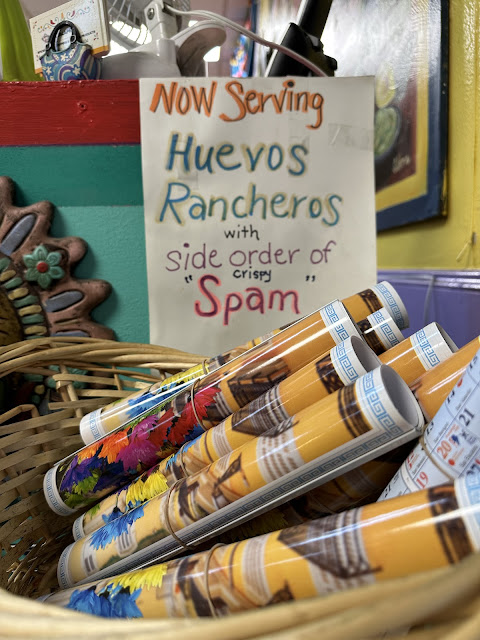 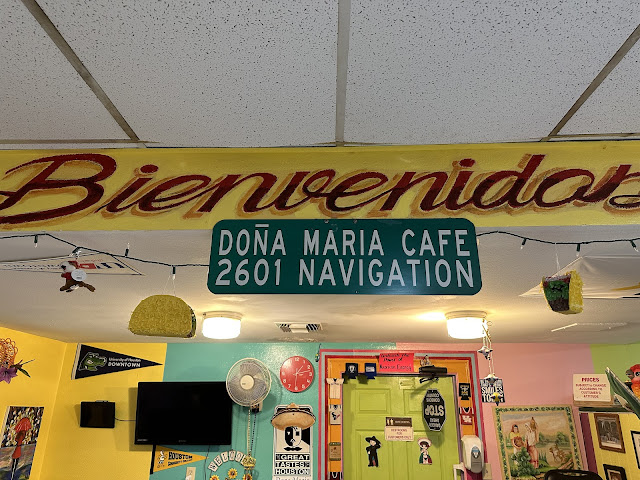 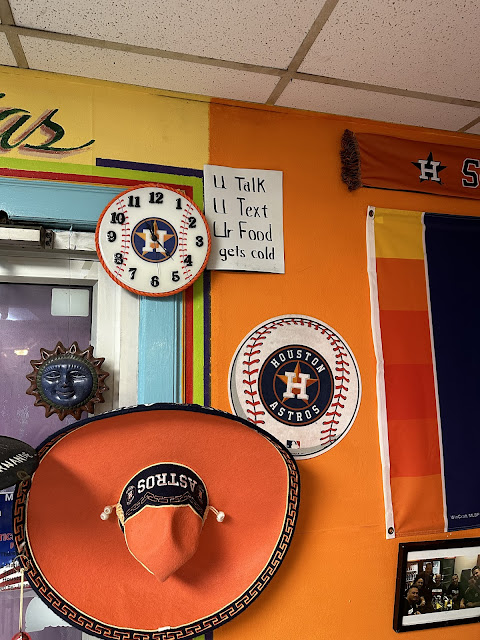 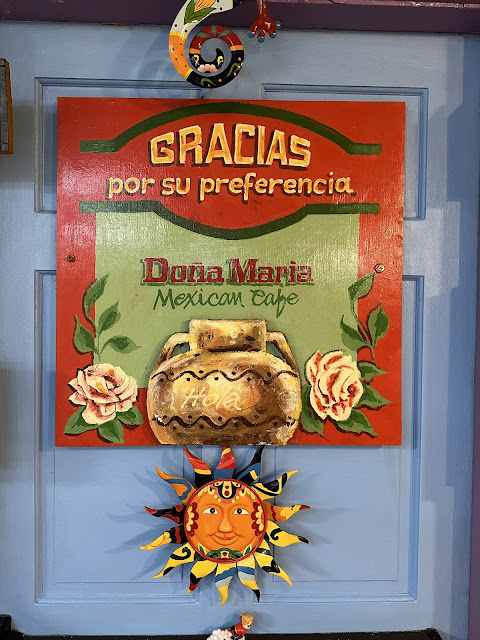 Adán Medrano, culinary historian and author of two superb books on the cuisine of Mexicano cuisine in Texas, wrote the following for The Houston Press, part of articles he did as he explored Mexican restaurants on Navigation. Here is a link to the Houston Press article: 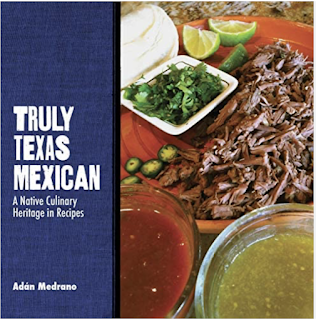 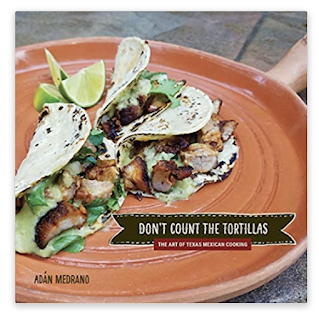 "Doña María Mexican Café serves the type of breakfast tacos that are at the heart of traditional Mexican American home cooking. The cafe is one in a six-cluster of restaurants on Navigation that reveal the original, indigenous culinary traditions of Houston.

Taco choices include scrambled eggs with either chorizo, potato, chicharrón (bits of pork skin), or with country sausage, all of them cooked to order, à la minute. A delicious option for any of the tacos is to add pinto beans cooked in the traditional way, mashed and pan-roasted with very little oil, if any. As for me, I’m hopelessly in love with the straightforward combination of scrambled eggs and pinto beans, just a little salt. Why gild the lily?

The menu offers full breakfast plates like the familiar and well-executed huevos rancheros and eggs a la Mexicana with diced fresh jalapeño, but also the lesser known machacado con huevo, this last one truly a core tradition. Machacado is made with meat that has been salted and air-dried, a technique employed for centuries in Texas, salt being central to Native American cooking. It was first employed because it was necessary for food preservation, but today it’s the flavor appeal that keeps the technique a constant one.

My dad and most of his generation dried venison and also beef. He sliced it as thin as paper, cut it into large sheets (sábanas) then salted and air-dried it. To make machacado from these sheets, they are pounded on a mortar, crushed into strands, like thin threads. “Machacar” means to crush. Then the strands are scrambled with eggs, sometimes adding a trio of diced green chile, onions and tomato. The breakfast machado plate is served with traditional mashed pinto beans, cubed potatoes, and a side of tortillas. It’s a favorite of the regulars at Doña María and if you’ve never tried it, go ahead and step into the welcoming world of Texas Mexican cooking. 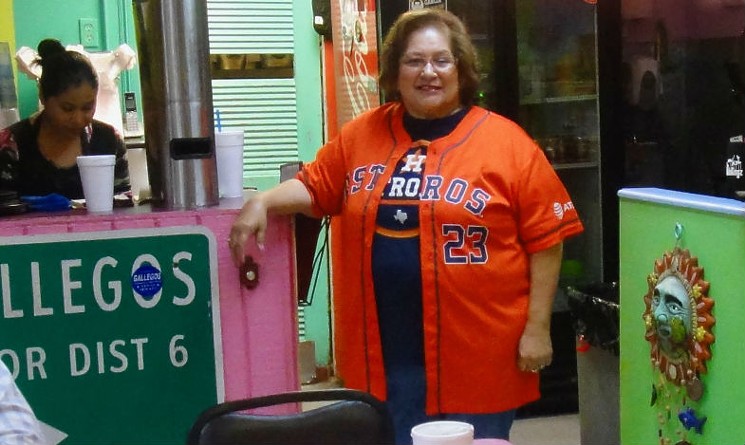 Anna Hernandez is the owner of Doña María Mexican Café, along with her husband Juan, and they feature recipes that are traditional in Mexican American families.
Photo by Adán Medrano
“It’s a corner of culture,” says Anna Hernandez, who owns the restaurant with her husband, Juan. To Anna and Juan, culture means hospitality, the welcoming context that all home cooking has in common, in every part of the world. Dr. Alston Thoms, Professor of Anthropology at Texas A&M, explains that the Karankawa and Atakapa people who flourished in Houston for 2,000 years until the conquest were all groups of families. “The sense of family and community is decidedly indigenous,” he adds. At Doña María there’s a non-clubby family feeling to the small frame house that seats 50.

Doña María was founded in 1988 by María Piñeda (hence the restaurant name) and in 2005, Anna and Juan took over the business, keeping some of the recipes but replacing many with those of Anna’s family. Anna is from Houston and Juan is from Mercedes in the Rio Grande Valley, so their menu is 100 percent comida casera, home-cooking, of Texas Mexican American families. 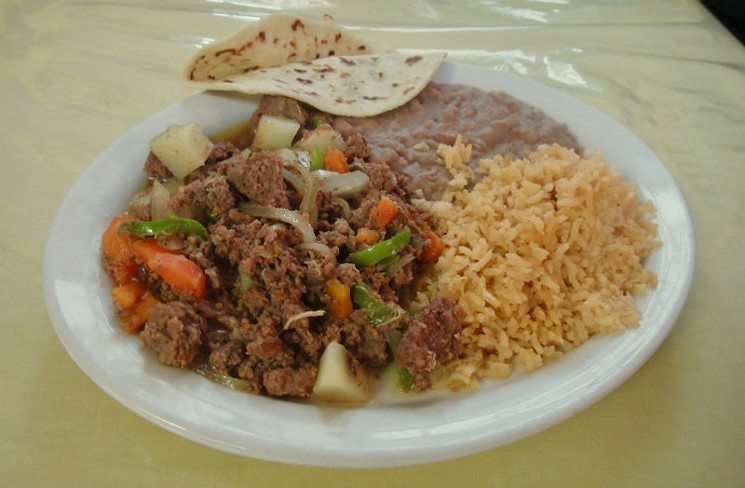 Picadillo, ground beef with vegetables, potatoes, one of the iconic dishes of the Mexican food of Texas.
Photo by Adán Medrano
Picadillo and fideo are prime examples of this unique cuisine. Picadillo is ground beef stewed with onions, carrots, bell pepper, potatoes, and seasoned with a trinity of spices unique to Texas Mexican cooking, the combination of garlic, black pepper and cumin. Order that, and I’m back home, with mom and impish siblings. 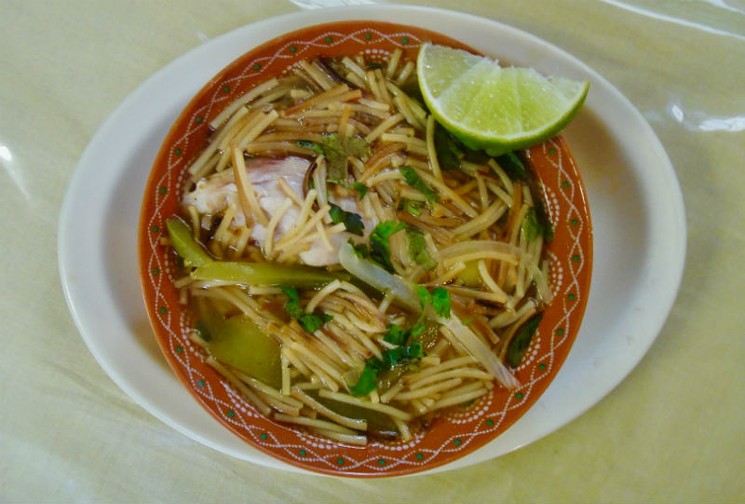 Fideo is an iconic dish of Texas Mexican cooking, pan roasted vermicelli in a seasoned tomato broth. Doña María adds a slice of poached chicken breast.
Photo by Adán Medrano
The production secret for delivering such good-tasting picadillo without fail is the expert kitchen staff that Anna hires. The sous-chef is Ever Ochoa. She is skilled in making mole and other sauces, and she heads the cooking line. “Es puro sabor casero,” Ever says, the flavor is pure home-cooking. 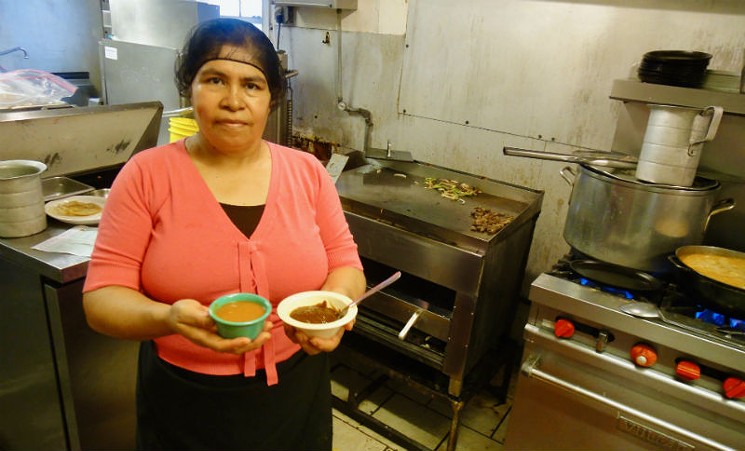 Sous Chef, Ever Ochoa, prepares the mole, sauces and heads up the production line in the kitchen.
Photo by Adán Medrano
Fideo is another dish that is iconic in the Mexican food of Texas. Vermicelli pasta is first pan-roasted to acquire color, then boiled with tomato, onion and seasonings. Chef Ochoa adds a large slice of chicken breast, and it’s a full, scrumptious meal. Like the picadillo, fideo is so traditional that it’s an indelible taste memory of the East End community.

No truly Texas Mexican dish is complete without flour tortillas, the wheat culinary creation born in the Texas and Mexico region that extends along a band 150 miles north and 150 miles south of the Rio Grande, once just a river to the indigenous peoples, now a geopolitical border. You know it’s an expert tortilla when it balloons magnificently on the comal, griddle.

Griselda Delgado Lamas makes them daily at Doña María, mixing and kneading the dough before shaping small balls that she rolls out and cooks. She’ll make about 300 each day, and sometimes 500 for a big catering job. Griselda has been making the Doña María tortillas already for 10 years. She’s fast, making them in the San Antonio and Rio Grande Valley style, laying them on the griddle for a few seconds, then turning them over and watching them puff up, soft and lithesome. Simply delicious. 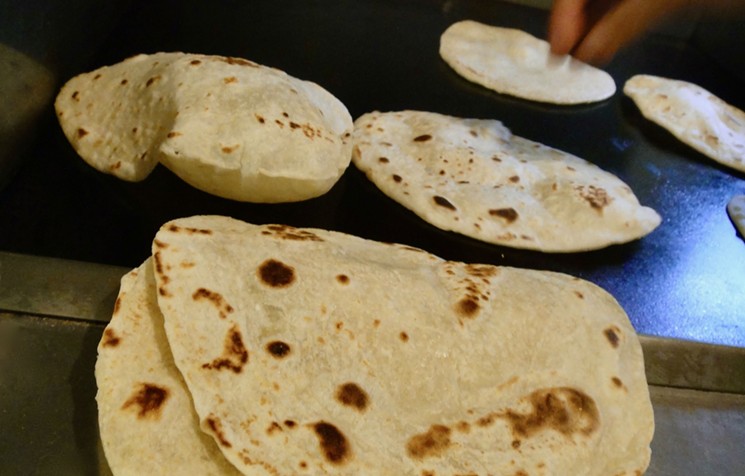 Traditional Texas Mexican tortillas puff up on the griddle. Master tortilla maker, Griselda Delgado Ochoa, flips them effortlessly, lightly.
Photo by Adán Medrano
Hours are from 7 a.m. to 2:00 p.m. on weekdays and 7:30 a.m. to 2:00 p.m. on weekends. The restaurant is closed on Mondays. On weekends, diners leisurely congregate in conversation outside the door, their names on a waiting list. The combination of hospitality and traditional Texas Mexican home-cooking is the formula for success.
at January 25, 2023