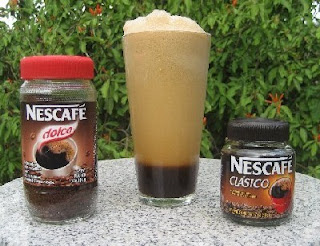 The story that I heard while living in Greece was that, in 1957, Nestle's was marketing an instant chocolate milk drink to the Greek market and giving away free cocktail shakers. This gave one of their Greek executives an idea on how to penetrate the Greek market with Nestle's instant coffee: Ice, water, sugar and instant coffee, shaken not stirred. 1957, at the Thessaloniki International Trade Fair in Greece, the representative of the Nestlé company in Greece, Yannis Dritsas, was present to display a new instant chocolate drink for children, which was ready by mixing it in a shaker with milk.

Dritsas’ assistant and subordinate, Dimitrios Vakondios, looking for a way to make instant coffee on his break, coffee he usually drank every day, found no hot water anywhere. He then decided, also using a shaker, to prepare it by mixing it with cold water.

By shaking coffee, sugar and water in this way, he obtained the first frappé coffee in history.

They had a hit. It's the national drink of Greece, some say.
I've found two excellent substitutes, readily available at Fiesta and other fine grocery stores catering to the Latin American market, for the Greek Nescafe.
Look for Nestle's Dolca or Nestle's Clasico instant coffees. Dolca is preferred as it contains caramelized sugar and has a richer taste.


If you want to be truly "authentic", Phoenicia carries the Greek Nescafe at both of their locations!

Here's the recipe (you can use a cocktail shaker, a milk frother or a blender....I prefer the blender):

Shake or whip the until you get a thick foam. Pour into a glass and watch as the coffee slowly separates from the foam. The colors, man, the colors!

Food Geek Trivia: When Nestle' started marketing Nescafe in Latin America, they had a bit of a glitch at first as Nescafe sounds a lot like "no es cafe" (it isn't coffee).

Heinrich Hall wrote in 2015: "There is also some frappé folklore. For example, some websites list colloquial terms for badly-made frappés, like “petimezi” (“grape molasses“), if it’s too sweet, “dynamitis” (“dynamite“) if it’s too strong, or “nerozoumi” (“water-brew“) if it’s too weak. Admittedly, I have never heard any of them used – but I have come across the occasional frappé variation, including additional ingredients such as ice cream, various alcoholic drinks or chocolate. To my mind, they spoil the simplicity. "
“ Few can turn down a frothy frappé on a hot summer’s day. The iconic iced-coffee drink was accidentally invented in 1957 at the Thessaloniki International Fair, when Nestlé representative Giannis Dritsas found himself without hot water for his usual coffee break. Instead, he put the coffee with cold water and ice in a shaker. The rest, as they say, is history, with the frappé reigning supreme until the advent of the freddo espresso and freddo cappuccino. Enjoy this piece of Thessaloniki history at one of the city’s many cafes – the most per capita of any European city, it’s said. Top coffee spots include minimalist Ypsilon and the more traditional Loux, overlooking the Roman forum.”
at January 01, 2021