Many years ago, a friend to one of our parties brought frozen dumplings from San Dong Noodle, then located in the Diho Center. He showed us how to drop the dumplings into boiling water, and how they were ready when they floated to the top. He taught us how to make a dipping sauce with ginger, rice vinegar and soy sauce. A couple of weeks later I made my first trip to San Dong. At that time I sensed that the staff at the register were a little uncomfortable speaking English and I found that I could pop around and chat in Spanish with the kitchen staff in order to learn the differences in the dumplings and what could be ordered. I had many meals there and when Robb Walsh and I first met, it was the first place I thought of to take him to. All of these years later, it is still a favorite spot for dumplings, along with Northern Pasta, and several others that the extraordinary food explorer, Michael Shum has introduced me to. Today, he and I met up at San Dong, each of us going for the dumplings in a rich beef broth soup. I remarked at one point "This broth would be perfect for a French onion soup!". We talked about the Guillermo del Toro movie, philosophy, ethics, as is our style. Here's a photo of the dumpling soup from today. #17 on the menu. Around $9.00, and a real bargain.

Plan to buy several bags of frozen dumplings to keep in your freezer for emergency meals, snacks or parties.

San Dong will have bottles of rice vinegar and soy sauce so that you can make your own dipping sauce, so plan to also try some pan fried dumplings while you are there. 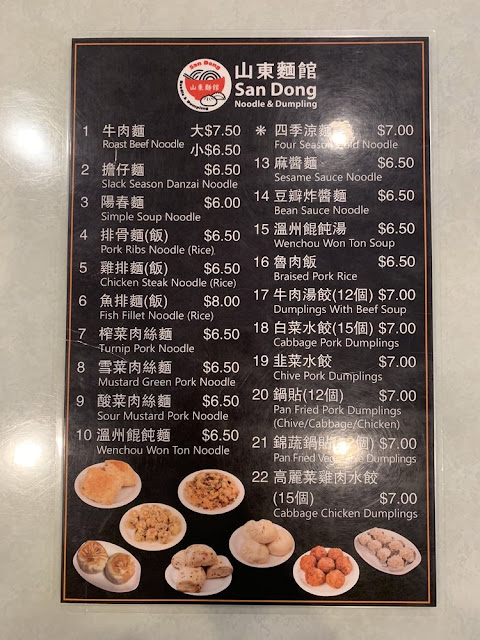