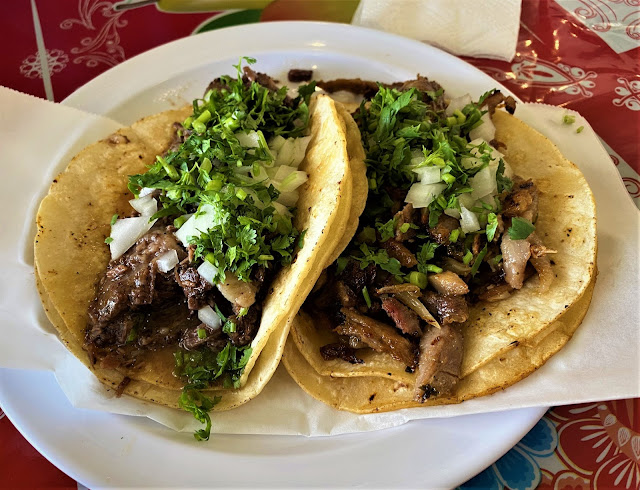 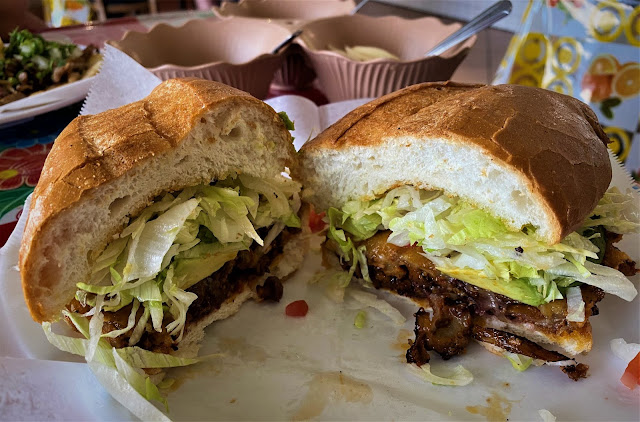 "   What a joy to find little treasures where you least expect them! Next time you're craving tacos and are facing the maddening construction-related traffic delays on Shepherd north of Buffalo Bayou, keep your eyes peeled for a tiny place on your right called Tio Trompo (316 Shepherd). Pull in and prepare to be intoxicated by the glorious aromas of marinated pork spinning on a roasting spit, a.k.a. el trompo. A kind couple from Veracruz, México and probably also their adorable curly-haired son (likely just a little more than a half-dozen years of age) will happily serve you food that will make you very thankful you took the time to read this.

No list of Veracruz food specialties that I've ever seen has included tacos, but there's no part of México where tacos aren't served and worshipped, and often, tacos from one state can have unique spice or preparation profiles that make them unique. I have seen places use interchangeably the terms "tacos de trompo," "tacos al pastor," and "tacos árabes," but each is subtly different, and all are available at Tío Trompo. In fact, Tío Trompo also serves a "taco oriental," which is the first I've seen in Houston (it's made with white pork meat instead of red and features a few additional spices). Because of unbelievably stupid laws here, finding authentic trompo has in the past required leaving town (to Karancho's in Channelview, for example). But now, you can thakfully just drive to Rice Military.
Start with the outstanding guacamole, thick and with just the right amount of seasoning. When you recall all the places now charging $15 and more for half this portion, you'll be cheering the $6 charged here. Order a torta featuring well-seasoned al pastor meat, straight from the trompo, the way the gods intended. Also, don't pass up the taco árabe, made similar to ones you would find in taco stands all around Puebla, México, where they originated, based on recipes brought by mostly Lebanese and Iraqi immigrants around the turn of the 20th Century. A large pita bread is stuffed with that delectable trompo meat, on which you should liberally slather that guac and then drizzle on some of the outstanding salsas verde y rojo. You'll also receive a ramekin of sliced onions marinated with microscopike habanero chiles--very spicy, and addictive as crack. And hopefully, you visit on the weekend, when they serve barbacoa that rivals Gerardo's. Tacos here are generously-portioned and a bargain at $3 to $3.50 each ($6 for the much larger taco árabe); 3 will be a substantial meal.
If you're one of those tortilla queens who can't bear the thought of tortillas not made from nixtamalized heirloom corn grown from seeds procured from fincadores on ancient Zapotecan lands outside of Oaxaca, then go to Tátemo. The corn tortillas at Tío Trompo are plenty respectable, but they won't win any Ms. Maiz Mexicana contests. The meat is the star here and would even taste magnificent on those Whole Foods Market keto-friendly, organic monstrosities made with coconut oil.
Tío Trompo also does breakfast tacos, and other tables were ordering them even though it was well after noon when we visited--they looked enormous. And though Tío Trompo does a respectable jamaica and horchata, bring along the essential liquid that never fails to perfectly compliment tacos--cerveza. And I'll bet the nice people at Tío Trompo will be happy to furnish all you need to create a perfect michelada. "