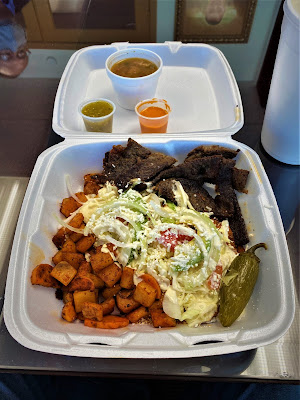 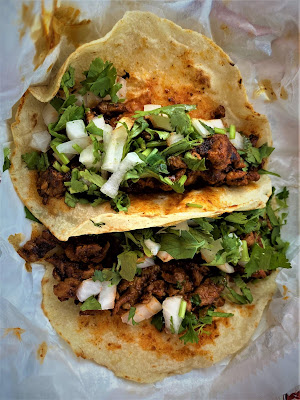 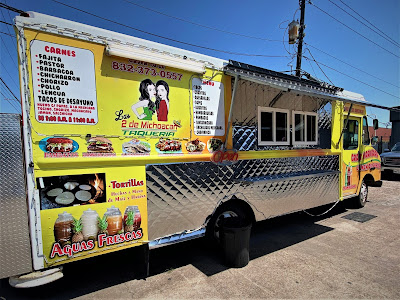 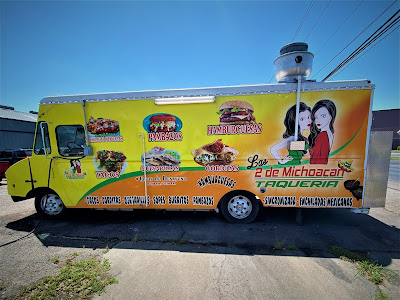 John writes: "  We can all agree that Mexico has some of the best food on the planet, and Houstonians are blessed to have a fabulous selection from all parts of Mexico available in every nook and cranny of our fair city. For food from the interior, food trucks are often the best source, and the choices are overwhelming. So I'm glad to be blessed with friends who post pictures of where they eat so I can discover new jewels to sample.

My friend Jose Tavera, who runs the San Felipe location of my favorite Antoine's branch, recently posted an a trailer in south Houston near Hobby called Taqueria las dos de Michoacán (6401 Telephone). I love the food of Michoacán, the home of carnitas and some of the best tamales in Mexico (uchepos!). And one of my favorite of all dishes is enchiladas michoacanas, which often look more like large red dumplings because they are made with tortillas soaked in a guajillo chile salsa before being fried and filled with a delicious filling that always contains pureed potato but may also feature soft minced carrot or frijoles added to the mix. These are topped with shredded lettuce, sliced onions, carrots in vinegar, salsas verdes and/or rojos, hopefully some avocado, and crumbled cotija cheese. On the side are usually frijoles, arroz (or even better, more papas!), a roasted jalapeño, and cecina--like a cross between machacada and fajita meat. The version at this delightful little taqueria parked in a a car repair parking lot is one of the best I've had in Houston.
I added on 2 tacos de pastor. Every so often, a taco in Houston grabs my attention. These nearly snapped my head off they were so delicious! The tortillas are made by hand, and the meat is perfectly seasoned. Nothing fancy, but they are the type of tacos you'll wish you ordered more of.
If you've never tried enchiladas michoacanas, you should try this place. And while driving around (particularly on the north side) also watch for enchiladas potosinas--also incredible!"
Jay writes: "Ever notice when you order enchiladas in San Antonio, that the tortillas are red? Why is that? Here's my hypothesis. The word enchilada comes from the verb enchilar ( to add chile to something) and the dish is actually tortillas enchiladas, shortened over time to just enchiladas and including variations that may not even be "chile'ed". In San Luis Potosí, the enchiladas Potosínas tortillas are made with a masa that has been flavored/colored with guajillo chiles ( the "Mexican paprika" as the guajillo adds color to chorizo and other dishes). That is their tradition and what sets a criteria to be called Potosínas, along with a side serving of carrots and potatoes (in my experience). When Gebhardt developed his chili powder (he had the "aha" moment where he realized he could apply the powdered paprika technology of Austria-Hungary to Mexican chiles), the chiles (mainly ancho and guajillo) were brought up in bulk from the state of San Luis Potosí, according to some Gebhardt literature I have from the early 1900's. I'm guessing that the masa in San Antonio was influenced by this tradition, though, nowadays, the red comes more often from a food grade food coloring lol.