The Korean family that owns North Chine immigrated to the United States several decades ago. They advise that their focus is on more Northern style dishes, and we found that the four dishes we sampled were pretty darn good. The most interesting was the Mandarin Spring Rolls on the menu. Instead of a more standard egg roll or spring roll wrapper, the filling was encased in an egg pancake. The sauce was spicy. 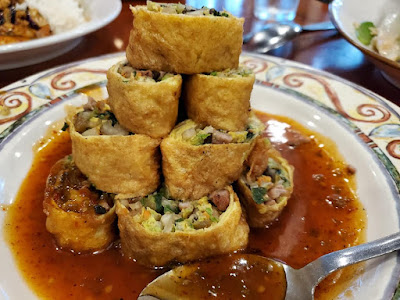 One of the things that I personally liked was that the menu descriptions of each item listed the main ingredients. This was so refreshing. And informative, too.

Arbol chiles showed up in many of the descriptions.

My current dieting caught up with me here and I opted for the mild Chicken Garden chicken with vegetables in a light sauce. 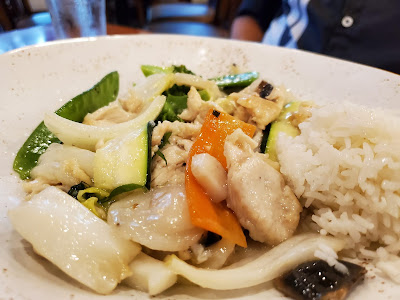 Greg ordered the Beijing Fish Filet, that was lightly breaded and served in a sweet and spicy sauce with caramelized onions. I really liked it. That is what I would order the next time. 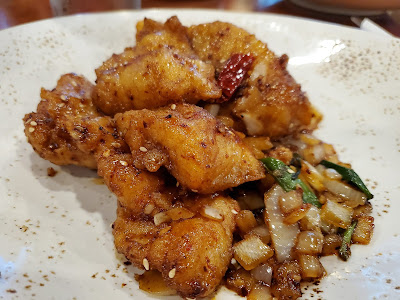 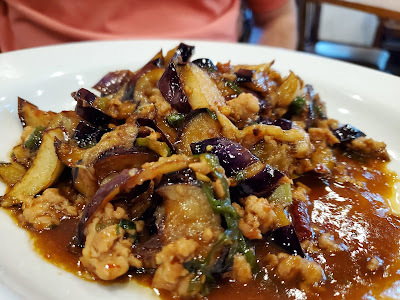 "If you know your geography, you know that Korea sticks out like a rabbit-shaped appendage from China. The cultural and culinary ties between the countries are profound though Koreans have grown almost as wary of their powerful northern neighbor as they've been towards the other nation across the East Sea (a.k.a. "Sea of Japan") that has tried to conquer Korea. Korean cuisine pulls from both countries but remains unique. If you've ever had Korean sushi, you know what I mean. But other than a place in Spring Branch called Mandarin (now closed), we haven't had many spots here that have specialized in Chinese-Korean food. Or so I thought.

Friend and foodie Gregory M. Buchold posted on his visit to a Korean-Chinese place at the corner of I-10 and Highway 6 called North China Restaurant (14525 Katy Freeway), and it took us less than 24 hours to make our visit. This turned out to be one of our favorite meals of the year, and I'm kicking myself that I did not know before this nearly 50 year old restaurant.
The delights start once you walk in the front door, where tall, handsome Fred, grandson of the restaurant's founder, will greet you like you're a long-time regular, which most of the diners are. Fred's family, who is ethnically Chinese, ran a restaurant in my birthplace of Seoul for many years and picked up on those dishes, particularly the ones with Chinese roots, that are favorites of Koreans. Most of the dishes on the menu are original recipes of his grandmother. He was happy to bring me a Korean menu that featured many of the dishes on the regular menu but also several unique ones. The menu definitely skews Chinese, but everything we tasted had us noticing unique touches of Korea.
We started with very unique homemade egg rolls though we noticed that nearly every table was ordering a plate that resembled a mini-temple featuring stacked Mandarin spring rolls. We're definitely getting that next time! We also had excellent steamed mandu (pork dumplings) with homemade cabbage kimchi.
Next arrived a plate called "Beijing Fish," featuring chunks of filet in a light batter, topped with a fine relish of scallions, garlic, yellow onion, sesame seeds, red papper, chile de arbol, and a slightly sweet soy-like sauce. A simple looking dish but super tasty--much like fish my Mom cooks at home.
This was already a lot of food, but we couldn't pass up our favorite of all Korean pasta dishes, japchae and jiajiangmyeon. Japchae is a traditional Korean plate of glass noodles sauteed with vegetables, beef, and any number of other toppings. There is no other noodle dish in Asia quite like it, and every Korean kitchen on the planet has its own recipe. I love the version here--far more veggies than usual but so finely chopped that they practically blend with the glass noodles.
Oh, and that jiajiang!! My Mom likes to cook for family birthdays, and we get to choose our favorite dish. For Richi, it's always jiajiang. Once again, the recipe depends on the chef, and the menu here features about 7 different varieties! We went with the traditional, featuring onions and small slices of beef cooked in a slightly sweet fermented black bean paste and served on rice noodles a little thicker than spaghetti topped with slivers of sliced cucumber. This dish, which has roots in Beijing (I've eaten at the restaurant there that claims to serve the original recipe), is so popular in Korea that in Incheon, the city where Seoul's new airport is located, there is a street called Jiajiang Alley, full of restaurants that only serve it. The only version of this dish in Houston that is better than the one at North China is, you guessed it, my Mom's!
I can't wait to come back and try more from this menu--omurice (like an omelette filled with rice sauteed with beef and sauces--including in some recipes ketchup!), jjampong (the best seafood soup on earth), and tangsuyuk (a true Korean-Chinese fusion of sweet/sour pork or beef). It may have taken me 50 years to visit this place, but it's not likely to take more than a few days for me to return to it! 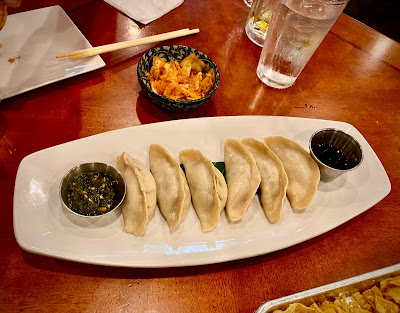 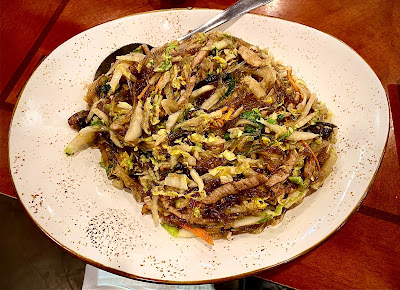 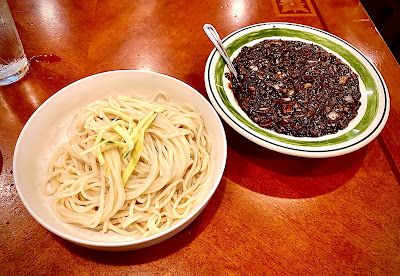