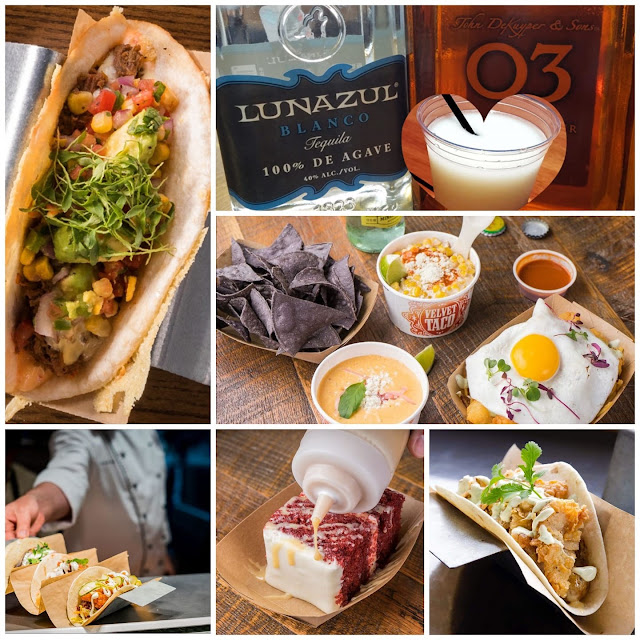 Mexico is made up of many different regions, each with their own style of taco. For this reason, I say that there are no rules for fillings, but a tortilla, traditIonally a soft, corn tortilla or two, has to to be at the base...the “plate” if you will, for the fillings. Most of the taquerias in Houston default to the style of Jalisco (Guadalajara is its largest city) or Monterrey. Essentially, if you see "taqueria" in the name, it is probably going to be authentic. For an introduction to these, check out the steam table offering at Buey y Vaca, Taqueria Laredo, or Alamo Tamales (Berry Road location).

The word "taco" is very interesting. During the years when silver mining was big business in Mexico, a "taco" was the hole drilled into the side of the mine, stuffed with explosives and wadding (also, the wadding stuffed into a cannon), so you can see the image of a rolled soft tortilla being stuffed into one's mouth. Some of the earliest references are for a "taco de minero", that is, a "miner's taco". Now, with the immigration of people from Lebanon and Syria and Iraq in the early 1900's, the vertical spit (shawarma, doner, doneraki, gyros) came to Mexico and one of the oldest taco places in Puebla carries the name "El Sultan" and in Puebla you can still specify a 'taco arabes" which is with a pita bread type wrap instead of a tortilla. 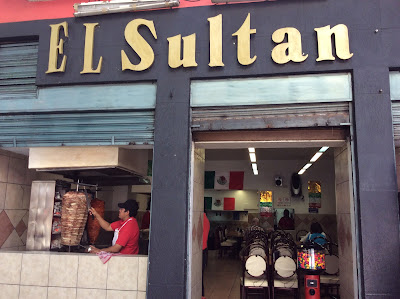 The default meat is pork, which is intriguing considering the vertical spit's Muslim country roots. My personal theory is that Lebanese and Syrian Christian immigrants introduced it to Mexico, thus, no issue, with choosing the more economical and tender pork over beef or lamb.

My friends and I liked the 'barbacoa style" taco but did not think that it had the mouth feel or flavor of classic barbacoa (which is made from cow head). We came up with a riff, for a taco called "potroastacoa" which would be closer to the mouth feel of classic barbacoa. We also riffed on an Italian-Mexican hybrid guacamole called "Giacomo-olé". Sounds like something TJ Cookwell might come up with. No idea what the spicing would be though. Perhaps just a hint of Mexican oregano?

By the way, if any of you would like to view a set of videos taken in Mexico City at a friends home of the method of making an authentic guacamole, head over to my FB page > photos > albums and check out my How To Make Guacamole video album.

Cheap Eats Alert!  :  On Monday, a whole, roasted chicken, with sides, is at half price and sells for only $10. They sell upwards of 130 so get there early before they sell out.

Now, for those who say “THAT ISN'T A TACO”, I comment that, now, in Mexico, with all the young chefs coming out of various cooking schools, the bar has been raised. One is seeing exciting and creative riffs on the classic tacos throughout Mexico. I recommend the following books on tacos for further information: Tacopedia by Holtz and Mena and Tacos by Stupak and Rothman. 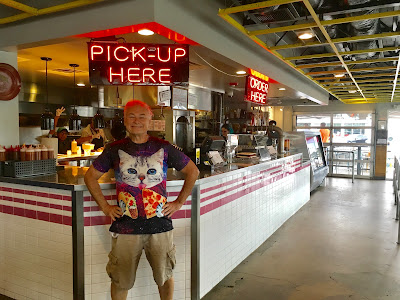 As some of you know, I got invited this week to sample the four brunch tacos at Velvet Taco. I thought they were very good and recommend them to you. Velvet Taco just seems to do a better job than a lot of other of the new "creative taco" places. You can tell that attention was paid not only to the fillings but also to the tortillas themselves which is a plus.

As a fried chicken guy (www.thefriedchickenblog.blogspot.com); I especially enjoyed the chicken and waffle riff, and thought their waffle tortilla was brilliant. 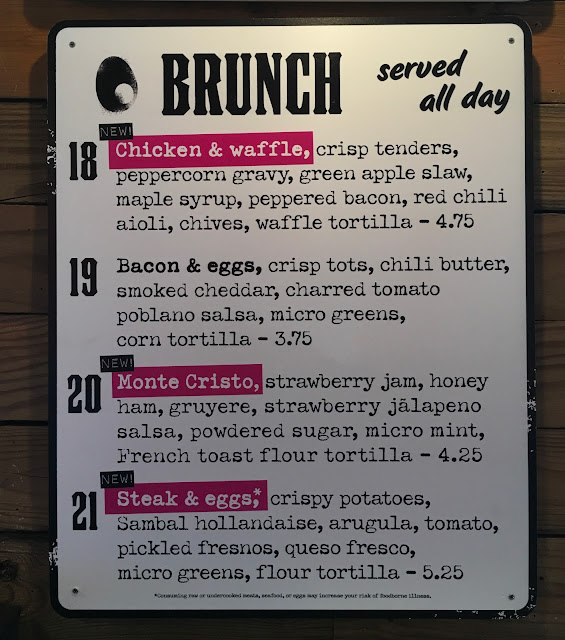 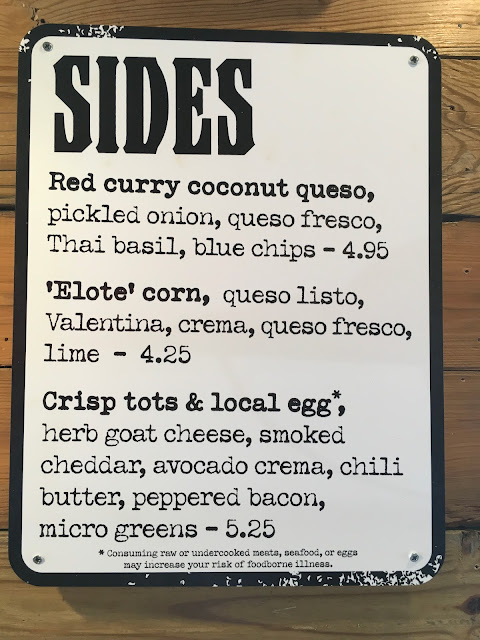 (The 'elote' corn side we thought was very good. The red curry coconut queso was too salty for our tastes and is not recommended) 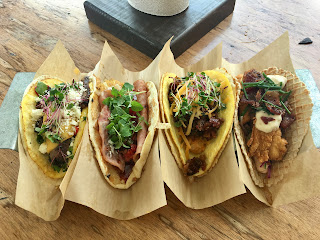 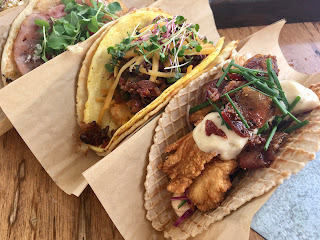 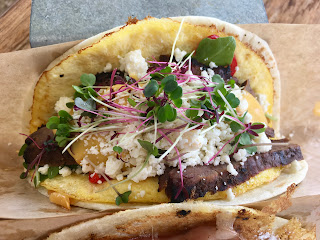 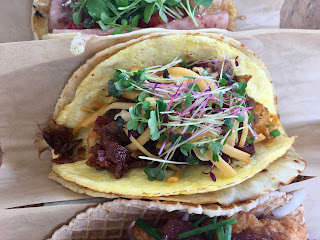 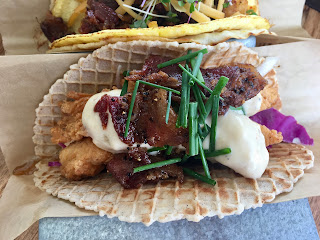 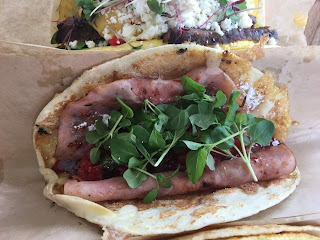 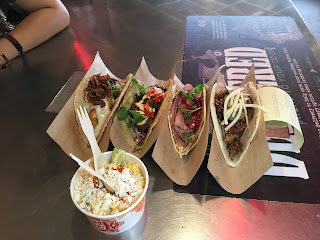 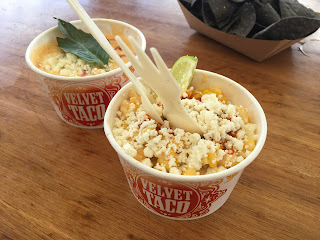 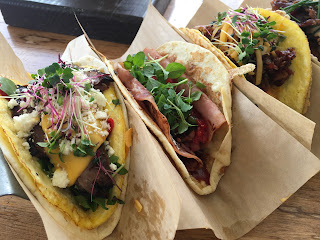 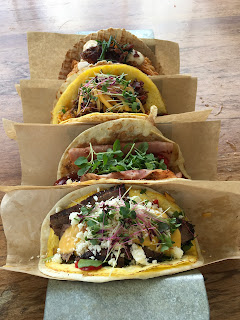 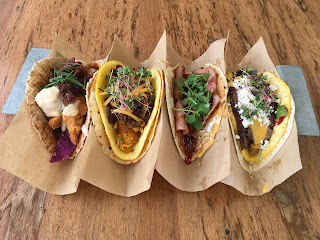 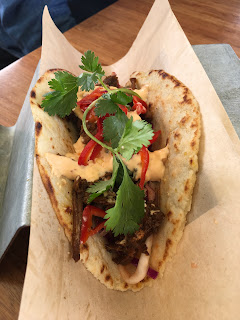 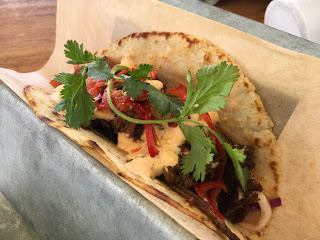 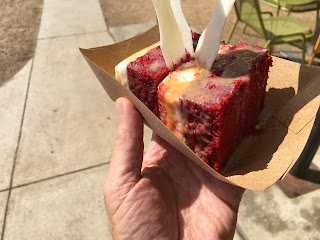 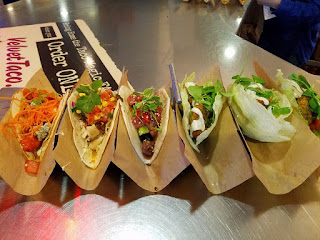 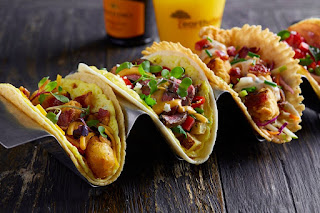 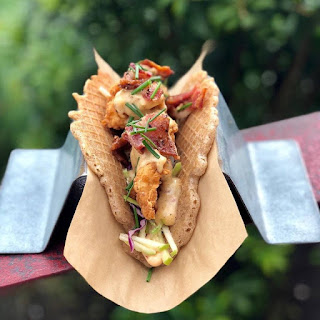